The Deep Breath Before the Plunge

I walk on the beach most mornings.

If I'm being honest, it's the best part of my day - fresh air, exercise, beautiful scenery, salt on my lips, sand in my shoes - I come home relaxed and with a clear head, ready to face the day.

There are people who, like me, walk there regularly - the lady with the pink shoes, the trio of pensioners who laugh lots and seem to have as much fun as their equally jolly dogs, the bare-foot jogger (a shade over six feet tall, dark hair, brown eyes, cheeky grin), the man who used to walk slowly using a cane for balance and who now puts me to shame striding up the beach (the cane is long gone), the couple who swim briefly every morning, no matter the weather. During the summer the beach was overtaken with tourists jumping into the waves or exploring the sand hills and, for a few days, the 'Game of Thrones' crew filmed there.

This morning I came across a pair of rather beautiful size 11 leather shoes sitting on the sand, dark grey socks tucked inside them. Not unusual - people leave their shoes on the shore all the time while they dip their toes in the water. This pair, however, were under threat - a large red setter had spotted them, sniffed them and had decided to claim them. I lifted them just as he lifted his leg.

Turned out they belonged to a rather dapper man, resplendent in a suit and tie who was paddling a few feet away, trousers rolled up to the knees, tie slightly askew and glasses pushed onto the top of his head. After sharing a laugh at the close call, we got talking.

Keith was about to drive to Belfast to make an important presentation to the owners of the company that he worked for. If successful, he would move up the corporate ladder, secure his future in the company and relocate to London where the company have their headquarters.

He was nervous about the presentation but fairly confident in his own ability to perform well under pressure. He also knew that he was good at his job and was considered an asset to the company. In reality, it was a done deal - the presentation was the final step. He was on his way. Everyone was happy for him.

Having had several similar conversations recently, I let him talk it all out until he ran out of steam and then I offered the only advice I had, 'Are you ever likely to have this opportunity again?' He thought about it, smiled sadly and shook his head. 'Then go for it. This is home and you can always come back.' 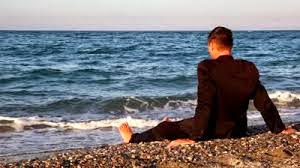