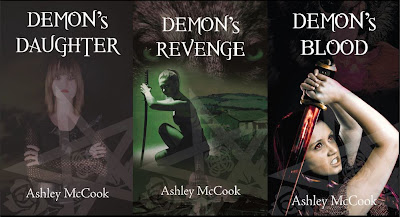 It was about 5 years ago that I sat down and wrote a short story to amuse my daughter. At the time I was playing about with a manuscript that had been worked and reworked and then torn apart and written again several hundred times - a thriller with a twist. This short story was a major departure from the dastardly dealings of government agents, terrorist cells and other such shady shenanigans but I discovered that I rather enjoyed writing about Fallen Angels, Vampires and the like so I kept going.

Fast forward to today and Demon's Blood, the final part of the Emily Trilogy, is ready to launch.

Not only that but it is launching in an actual branch of Waterstones.

Not only that but the launch of my new book baby will be the first launch of its kind by any Waterstones in Ireland - the paperback and ebook will launch together on the same night.

To say that I'm honoured and slightly flabbergasted would be an understatement.

There will be wine (and juice), food, a reading, signing, paperbacks for sale, ebook to download in the shop on the night - it's going to be AMAZING!

And you are invited!

Should you find yourself in Northern Ireland on the evening on 4th April 2013, between 7 and 9 pm then why not make your way to Waterstones in Coleraine and say howdy - I would LOVE to see you.