Emily is taken to a safe house in Italy where she meets the rest of the Fallen Angels and another 'potential' called 'Adrian', a descendant of Joan of Arc.


'    was now sitting cross-legged on the ground. He had closed his eyes and folded his hands together in front of him. Armaros gestured to Samyaza who handed him a long, gleaming sword. The sense of anticipation in the circle of Angels rose a notch as Armaros began to circle , skimming the sword across the ground so that it made a low hissing sound. stayed motionless, his shoulders rising and falling with each breath he took. Armaros lifted the sword above his head with a graceful swing, gripping it with both hands. He kept circling. kept breathing. My heart was thudding hard all of a sudden. Armaros looked menacing now, dangerous. I could see a few beads of sweat on ’s brow and a slight shake to his hands. The eyes of the other Angels glittered in the firelight. They looked enthralled and excited.

It happened so fast that I wasn’t sure I’d actually seen it at first. Armaros brought the sword down towards ’s head and, just as I drew in a breath to scream, certain that the blade would lodge in his skull, ’s hands came up and caught the blade between his palms. Applause erupted and I buried my head in Sariel’s shoulder for a moment.
I glanced at his face – as always he looked impassive although a small smile curved the corner of his lips. He was either impressed or amused by Armaros and Adrian’s theatrics. I couldn’t tell, although the urge to merge my mind with his and find out was more than tempting.
Beside us Uriel sighed and I forced myself away from Sariel. She was shaking her head. “Smoke and mirrors,” she muttered, “Cheap parlour tricks.”
Armaros swung around to face her. “You have something to say, sister?” he sneered.
Uriel nodded. “You think that a boy magician is what we need?”
Armaros’ eyes narrowed and his gaze flicked from Uriel to Samyaza and back again. He raised his voice. “You don’t believe that this boy has been blessed with these talents?”
Uriel smiled dangerously. “I don’t believe that an Archangel gifted him with them. Otherwise we’d have an army of amateur magicians running around boring the Demons to death with card tricks.”  ' 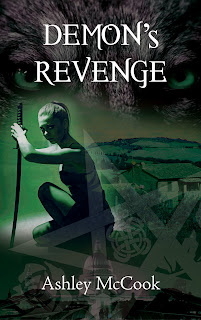 Demon's Revenge will be out in paperback and eBook format on 16th August 2012.
Posted by Ashley McCook at 10:31