I have a cunning plan...kinda. 2012 ended badly; remember that tiny glimmer of light I spotted back in October? Well, it was just the fuse being lit and the explosion was, well, it was more of an implosion. The resulting mess is still sorting itself out and I don't expect to be firing on all four cylinders again any time soon but I've decided on a plan  to get me back on track.

Be warned - it's selfish.

Step one - get a job to help pay the bills. Yep, I can tick that one off. Writing books doesn't make you rich - who knew, eh? (tee hee) - and getting out into the thick of the real world again has been a shock to the system but I'm doing my best not to let my new employers down .

Step two - sort out time management issues. (New 'normal' + new job) + (back-to-school + new stresses) = less time to write = (build up of ideas + overflow of 'need') = frustration. See? I CAN do maths...so long as it's written down with letters rather than numbers. So, I need a new routine for pretty much everything - which is going to be tricky when my shifts change weekly. I'm going to label this step as 'a work in progress' for now.

Step three - get book three to the editors and graphic designer; and tell myself that it WILL be published. Why is this important when the rest of my life is a wreck? It just is, okay? Maybe I just don't want to give up on getting Emily's trilogy finished and out there. Told you I was being selfish! Let's label this as 'ongoing' for now.

Step Four - Breathe. Give it time. I can admit to being a fairly pathetic human being most of the time - I don't deal well with the real world and all its challenges and stresses. I had the very good fortune to live in a wonderful bubble of home, family & writing for the past 10 years but that's over now and standing outside of that is scary and disorienting. I'd much rather invent a new persona, create a fantasy world for the new 'me' and write about it instead of actually living it (the mistakes you make in a story can be erased and remade as many times as necessary - when you make a mistake in the real world, you pay for it.) but that's not going to happen. How on earth does everyone else make it all look so effortless? I'm jealous as hell!

Time to deal with reality for a while. 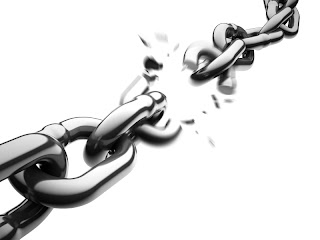