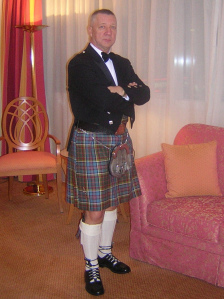 Ladies and Gentlemen, please be upstanding for the one and only Sir Seumas Gallacher, Blogger of the Year, founder of #TBSU, writer of rather fabulous books and all-round decent bloke. Come on in and take a seat there, Sir Seumas. Don’t be shy – pour yourself a diluting orange and grab a custard cream. Atta boy.
Thank you so much for putting yourself in harm’s way (well, in the way of matron’s rather beefy arms and shiny needles) by sneaking out to visit – I’m mighty impressed by your ninja-like agility through the wwweb. You’ve obviously learned a thing or two from the hero of your novels, Mr Jack Calder (slight swoon). Ready to answer a few questions?

Let’s start with something simple…what’s your favourite fruit?

You can probably argue that you're still getting your 'five a day'. When and why did you begin writing?

This morning about 7.15a.m., coz I was up already…oh y’mean ‘way back?...I did a few school magazine articles which have not yet appeared at Sotheby’s…then some angst-riddled poetry in my teens…the novels only erupted four years ago, and I sincerely wish I’d been afflicted 40 years earlier…LUVIN’ IT…

Are the names of the characters in your novels important?

Yes, otherwise you wouldn’t know who was doing what…Oh, y’mean ‘significant’?..em…deep psychoanalysis would probably find some weirdly obscure reason for so many names starting with the letter ‘J’…(my own real first name is ‘James’)…

What was the hardest part of writing your books?

Keeping the pace right…my books are action driven…but I DO have to moderate the flow, almost like back-filling the narrative…giving the reader (and myself) a bit of a breather every now and again…I’ve also discovered the joy (I mean it) of line by line editing…now I’m starting to feel like a more mature proponent of the scribblers art…

The 'joy of editing'? Lovely. Each to his own! If Ridley Scott/ Peter Jackson/ Tony Scott decided to make a movie of your books, who would you want to play the role of Jack Calder?

If he could adapt to the Scottish, Govan accent, Jason Statham’s persona would fit…failing that, a toughened-up version of the excellent Ewan McGregor or Celtic Cousin, Colin Farrell…

Phoarr! Yea please!. I mean..er..jolly good show there, Sir. Excellent choices. Shall we move on? Do you hear from your readers much? What kinds of things do they say?

I get the occasional emails, which are usually generous in their praise of 'a good read'...that's all an author can hope for...I get loads more interaction for my blog, from which I derive enormous pleasure...locally in Abu Dhabi, I've done a lot of guest speaking spots with readers' groups and other associations, and I frequently meet people who've been at those...the feedback so far, thankfully, has been positive...(Thanks, Uncle Fred and Auntie Mabel).

Ah, bless their little cotton socks. What do you like to do when you're not writing?

*Giggle* What are the most important attributes to remaining sane as a writer?

I'm not convinced that sanity is necessarily a virtuous attribute for a writer...for most of us reality is a distant concept...I prefer my cocoon of craziness as it is...(the only downside if Matron and that bluddy syringe).

Sit down Sir Seumas, you're perfectly safe here. Take another sip of your orange squash. Another biscuit? Two more quick questions and you can get back to your cell...er...room before Matron even notices you've legged it. If you could be any character in fiction, who would you be?

The Chinese character, Lee, in Steinbeck's 'East of Eden'. He's the cook and housekeeper to the Trask family...an educated man,he disguises his wisdom in pidgin English, but gives air to most of the philosophical themes in the book, one of my all time favourites.

Kilt-wearing action man AND philosopher, eh? Okay...last question. What's the best piece of writing advice that you've been given?

And isn't it a good job that you didn't? A world without Jack Calder? Unthinkable! Wait...what's that awful noise? Matron calling your name? Dear Lord! Run man, run! Save yourself! Oh, and many thanks for the interview...hope to catch up with you again soo...oh, he's gone. Hang on, someone's banging on the door...Oh, hello there Sir, er...M'am. Seumas who? Nope, haven't seen him. Can I interest you in a custard cream? My, what a large needle you have. No, I'm not in need of medication.
AAARRRRRRGGGGGHHHHH!

Intrigued? Want to know more about MR. Gallacher and his books? (and why wouldn't you?) Then check out his rather fabulous BLOG or nip over to FACEBOOK or TWITTER (@seumasgallacher).

Want to dive into the wonderful world of Jack Calder? Or Seumas's collection of hilarious blog posts? I can highly recommend them.

STOP PRESS!!! My, aren't you visiting at the very BEST time. Vengeance Wears Black is FREE from today (24th January) until Sunday (28th January) so what are you waiting for - DOWNLOAD!!! (You know you want to...).

Thanks for stopping by. :-)